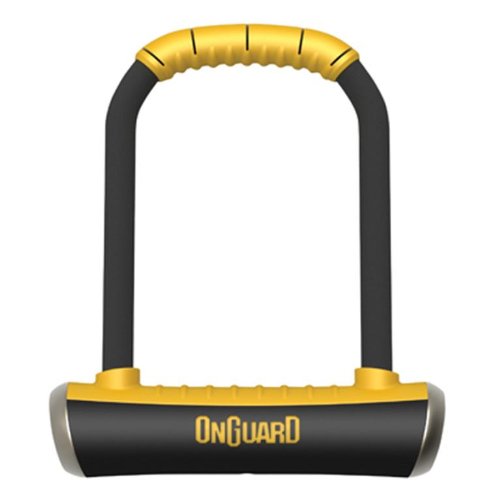 The Design of the On-Guard Brute

Considering the fairly low price tag that comes with the On-Guard Brute, we weren’t really sure what to expect, in terms of design. We assumed that the materials would at least be of a lesser quality. However, all of our assumptions about this bike lock were wrong and we were very impressed indeed.

First of all, let’s talk about the materials. The shackle of this bike lock is a huge 16.8mm and made from hardened steel which is far more durable than standard steel shackles. It is resistant to jacking, prying and cutting, meaning that it is incredibly secure, which is also reflected in the Sold Secure Gold Standard.

One thing that really impressed us with the design of the On-Guard Brute is the rubber coating on the shackle itself. Usually, shackles are simply made from steel. The rubber coating protects the shackle from the elements, reducing the risk of rust and furthering security levels even more.

A final point worth noting is that the shackle locks on all four points rather than just one, which again, makes it even more secure. Overall, this is a highly impressive design, especially for the price range.

Another nice addition was the LED light up key. You get five keys in total with the Brute, so losing one and getting stuck is unlikely. The LED key is perfect for dark evenings and light up the entire lock really well. If you are not used to using this type of lock then you might want to take a look at the instructions first, just to make sure that you don’t end up getting locked out. However, it really is very straightforward and easy to use.

The Portability of the On-Guard Brute

If portability is what you are looking for in a bike lock then the On-Guard Brute is probably not the lock for you. At 16.8mm, the shackle alone is one of the thickest on the market which significantly adds to the weight of the lock. As well as this, it is far from compact.

We found that we were able to carry it in a backpack relatively easily, but the extra weight was definitely noticeable. It probably wouldn’t be suitable for a long bike ride because it is going to hurt your back. However, there are mounts available that would be suitable for use with this particular bike lock, so if you plan on using it regularly and you don’t have a very lightweight frame then you could definitely use the On-Guard Brute.

Overall, this is a very good bike lock. The features that you get are what you would expect on a far more expensive bike lock. If you don’t have much to spend and you want to make sure that your bike is safe and secure then this is definitely the lock for you.

Scroll back to top